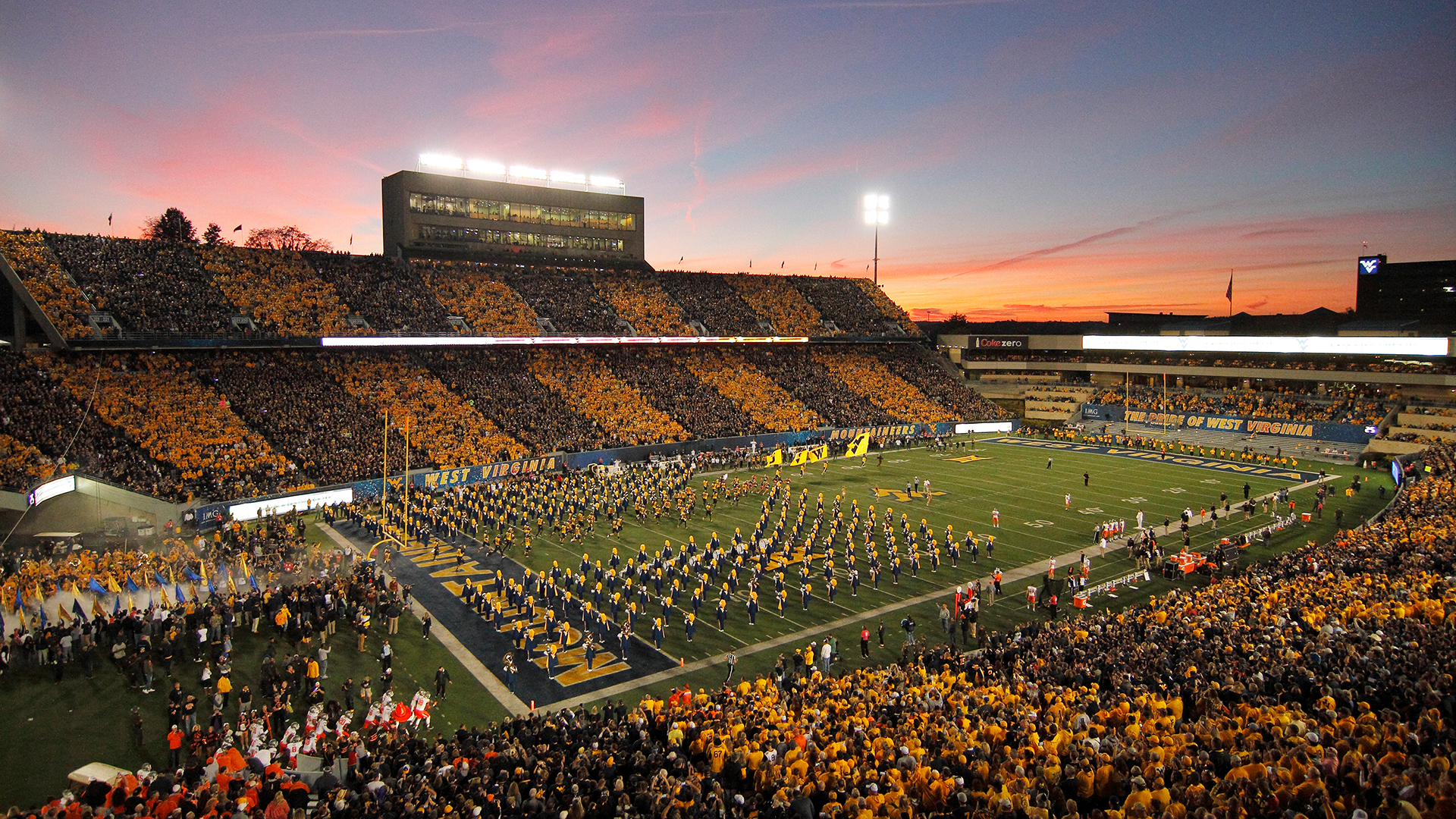 The original Mountaineer Field was located on the school’s main campus. However, it could not be expanded or modernized due to the proximity of campus buildings and roads near the stadium. The old Mountaineer Field seated 38,000 when it was last used in 1979. The new stadium was original to be called Mountaineer Stadium. Albeit, fans ignored this and called it New Mountaineer Field, with the “new”, eventually being disregarded over time too.

In 1980, Mountaineer Field was constructed on the former site of a golf course between the Law School and Medical School buildings. The stadium’s original cost was $22 million and had a seating capacity of 50,000. The stadium was expanded multiples times in 1985 and 1986, 7,500 seats were added the first time and later another 6,000 seats. Both additions cost a total of $7.15 million.

Eight years later, in 2004 the existing north end zone seats were removed to add luxury suites at a cost of $13 million. The renovation actually reduced the seating capacity by 3,500. In the summer of 2007, approximately 500 seats were added in the corners of the north end zone and above the weight room in the south end zone and the field received new turf. The official current capacity is at 60,000.

Going into the 2007 football season, the stadium turf was changed to the more popular FieldTurf surface. The cost was estimated to be almost $1 million. The turf was ready in time for the fall 2007 season, even after the endzone sections had to be replaced. Along with the new turf, constructions to the touchdown terrace on the north end zone were made to completely enclose the terrace. Additionally, 180 more seats were also installed before the start of the season. The field surface was once again replaced in 2016, to remove the crown on the field, which was used for water drainage, but is not needed anymore due to the type of turf that is being used. The stadium went through even more upgrades from then to the spring of 2015.

In late Spring of 2015, work began on approximately $55 million in renovations to Milan Puskar Stadium and Mountaineer Field. The old turf and goalposts were replaced, the large crown under the field was removed, a modern drainage system was installed that is more in keeping with today’s infilled artificial turf systems, and a Brock PowerBase shock pad was laid down. The FieldTurf Revolution surface was completed for the 2016 season. It also features a larger “Flying WV” logo at midfield.

More work was completed in 2016. This time the east side gates and concourses were the main focus. Their renovations included renovations to concessions, restrooms, new elevators/ADA accessibility, upgraded box seats, graphics, charging stations, and new audio/video systems. A new “Legends Park” honoring past Mountaineer greats in an expanded greenspace on the north end of the stadium was also added. A new route for the pregame “Mountaineer Mantrip” tradition was incorporated into the northeast gate and it included a large block of coal in remembrance of the Upper Big Branch mine disaster that was placed on a decorative pedestal for players, coaches, and fans to touch on their way into the stadium.

A mirror image of the east concourse on the west side of the stadium was completed in time for the first home game of the 2017 season. Other additions included a large new video board, measuring approximately 98 by 38 feet (30 by 12 m). It provides an additional viewing experience for fans to complement the existing board in the south end of the complex while upping the viewable square footage by almost 86% in comparison. The south end board was replaced and a new surround sound system installed throughout the seating areas. Another new field-width LED ribbon board was also installed above Touchdown Terrace along with the new video board in 2017.

Mountaineer Field has also hosted non-university football games and sporting events in the past. One notable game was a National Football League pre-season game on August 22, 1998, between the Pittsburgh Steelers and the Atlanta Falcons. When Mountaineer Field was dedicated on September 6, 1980, which also marked the first game for head coach Don Nehlen, fans were surprised when singer John Denver made an appearance and led the fans in the singing of his hit song “Take Me Home, Country Roads”. The stadium was also the host to regional Drum Corps International and Bands of America events, as well as many local high school band festivals.

Ticket Policies:
Read up on the ticket guarantee and our chosen ticket marketplace on the Mountaineer Field tickets page.

Sign up for our newsletter and get $5 off your first order!
You will also recieve a monthly “What’s On Guide” to your email!